FACING EAST TO PRAY
IS AN ABOMINATION!

The ancient Babylonians did it.   Egyptians still do it (below left).

Christian Catholics are famous for doing it (below right). 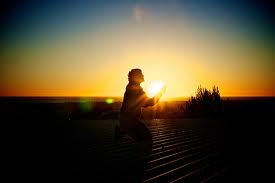 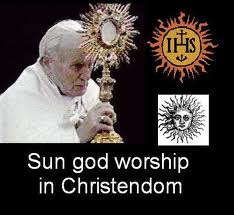 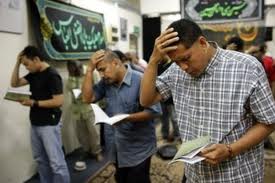 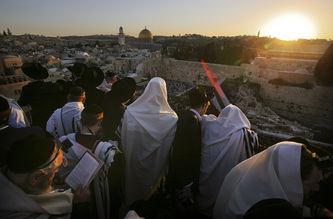 Even muslims do it (above right).

But that is not all,  even jews do it today! (above right)

And if that wasn't enough,  most MESSIANICS have imitated the jewish rabbinical practice as of lately!


But what does Yhwh think and say about this abominable practice?


The worship of the sun, or heliolatry (Greek ‘helios’: Sun and ‘latry’: worship or excessive devotion), is known to have been prevalent since the beginning of recorded history of man. Sun worship was very important among many cultures; particularly the Egyptian, Indo-European (Greek, Roman, Babylonian, Persian, Sumerian, Vedic Aryan etc), and Meso-American (Aztec, Mixtec, Maya etc) civilizations.

The influence of the sun was also important or formed an integral part of religious beliefs of, among others, the Druids of England, the Incas of Peru and many Native North American tribes. Among Eastern religions, Japanese mythology refers to ‘Amaterasu’ the Sun Goddess, while there are distinct influences of sun worship in certain forms of Buddhism. Sun worship has been a very important element of ancient and modern Hinduism.

Hinduism, as we know it today, is believed to have evolved over thousands of years, from a blend of the religious beliefs of the ancient indigenous ‘Indus Valley’ culture and the Vedic beliefs of invading (circa 2000–1500 BCE)  Indo-European ‘Aryan’ tribes from central Asia. The Vedas (the Rig-Veda, the Yajur-Veda, the Sama-Veda and the Atharva-Veda) and related texts (Brahmanas, Aranyakas, Upanishads and Puranas) are the sacred literature of Hinduism and are the oldest surviving scriptures still in use.

The Aryans were nature-worshipers who visualized the elements as warrior-like Gods; such as Indra (the god of thunder and of war); Surya (the sun god); Agni (the fire god); Vayu (the god of wind); and Varuna (the god of the oceans). These were important gods (Devas) of the Vedic pantheon and Indra was the ruler of the gods.  Over time, as the Vedic religion assimilated local influences and evolved into Hinduism, the importance of some of the minor early Vedic gods, such as Vishnu (one of the three main gods of Hinduism today, along with Brahma and Shiva) increased manifold. On the other hand, the importance of the original main gods waned to very minor levels – except for Surya, who maintained an important position throughout the process of transformation of Hinduism over millennia. Even today, devout Hindus start their day at sunrise, with the ritualistic Surya Namaskar (Sun salutation). The Surya Namaskar is explained in detail in the Vedas; specifically, the first chapter of the Tattritiya Aranyaka of the Krishna Yajur-Veda). The Gayatri Mantra, one of the most sacred of Hindu hymns, is also dedicated to the Sun.

Unknownst to many,  sun worship is alive and well in the present religious and non-religious world.

It is prevalent among catholics and other branches of the christian faith,  judaism,  islam, and as of late, also messianics in the so-called "hebrew-roots" movement.  The rabbinical practice of "facing toward Jerusalem" is nothing but a disguised and modernised version of babylonian sun worship.  This abominable practice was adopted by the jews during their stay in Babylonia and was the subject of severe condemnation by Yhwh through the prophet Ezekiel. We can see more about this in a page covering a pagan ritual performed every 28 years by the jews in Jerusalem at
http://www.sacbee.com/static/weblogs/photos/2009/04/021361.html
Let's read Ezekiel and see what Yhwh states about this pagan practice:

9 And he said to me, “Go in and see the wicked and detestable things they are doing here.” 10 So I went in and looked, ....   .... 12 He said to me, “Son of man, have you seen what the elders of Israel are doing in the darkness, each at the shrine of his own idol? They say, ‘ Yhwh does not see us;  Yhwh has forsaken the land.’” 13 Again, he said, “You will see them doing things that are even more detestable.”

14 Then he brought me to the entrance of the north gate of the house of Yhwh , and I saw women sitting there, mourning the god Tammuz.

15 He then said to me, “Do you see this, son of man? You will see things that are even more detestable than this.”

16 He then brought me into the inner court of the house Yhwh, and there at the entrance to the temple, between the portico and the altar, were about twenty-five men.  With their backs toward the temple of Yhwh     and their faces toward the east,   they were worshipping  the sun in the east.

17 He said to me, “Have you seen this, son of man?      Is it a trivial matter for the people of Judah to do the detestable things they are doing here?     Must they also fill the land with violence and continually arouse my anger?      Look at them putting the branch to their nose!

18 Therefore I will deal with them in anger;   I will not look on them with pity nor spare them.   Although they shout in my ears, I will not listen to them.”

Given this clear and intense warning,  It is worth reconsidering bowing to the sun next time one of Yhwh's kodeshim attends a messianic or jewish synagogue...